Home » A Sanctuary for Mustangs 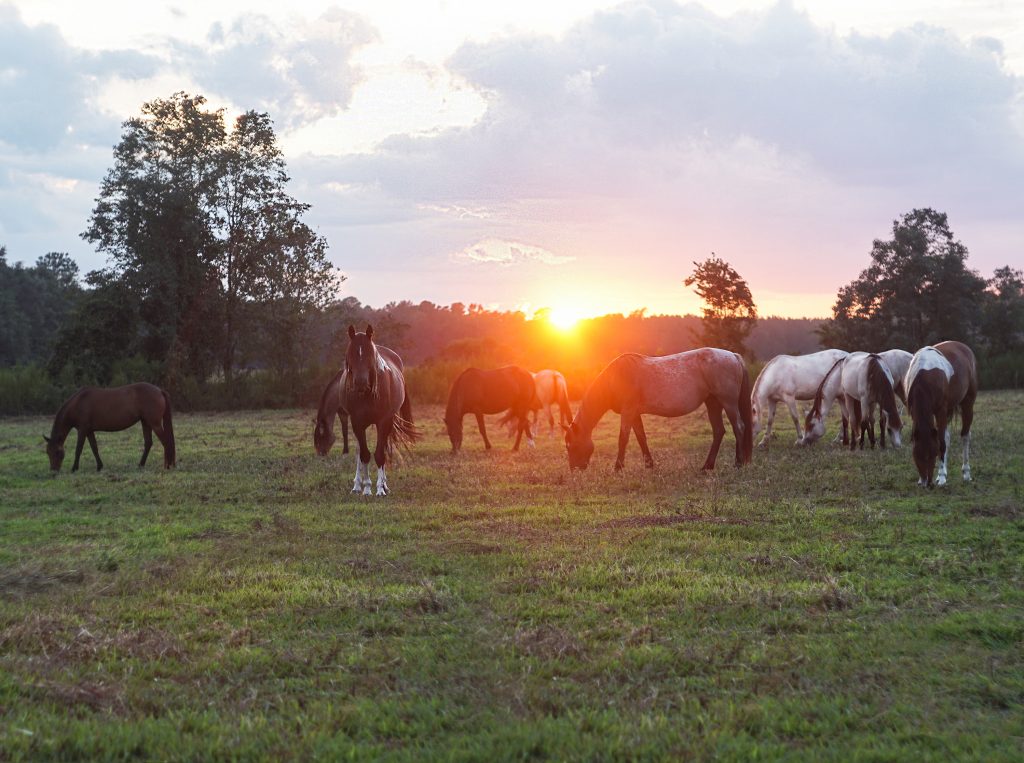 A Sanctuary for Mustangs

Born wild and free in states across America. Their wild horse population doubles every 4 years if not controlled, therefore the Bureau of Land Management (BLM) frequently operates round ups of some of these wild horses called ‘Mustangs’ every year. The Mustangs are then moved to BLM holding facilities where they are offered up for public adoption. There are currently over 50,000 wild Mustangs in need of adoptive homes.

Our sanctuary is home to 18 Mustangs. We are dedicated to offering them a forever home where they can remain in their family herd and live a life as much like they did in the wild as we can offer them. We also offer ‘perks’ of domestication, like regular meals and tender love and care. Mary spends quality time with each herd-mate, helping them understand that humans are kind and gentle. Our Mustangs love their human herd-mates as much as they do one another. This space is truly a sacred sanctuary for both horse and human alike. 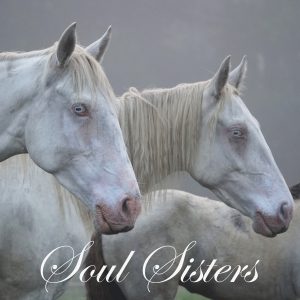 The ‘Soul Sister’ Mustangs took sanctuary with us in February of 2017.

These two were deeply bonded in the wild and once gathered and put up for public adoption we simply knew we must adopt them both and keep them together – forever.

They were both in foal (bred in the wild) and not long after we got them home, they gave birth to identical buckskin/roan colts!

All four Mustangs live together on the sanctuary space. In this image, Omega is to the left and Unity is to the right. They are physically identical, as you can see. But their personalities are so unique. Omega is bold and brave and the first to great new people, whereas Unity stays back, holding vast, deep space. They are like two pieces to one whole and it is truly otherworldly to see them both in person. 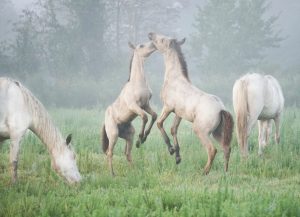 The ‘Soul Brother’ Mustangs are the babies born to the Soul Sisters. –>

They are two peas in a pod, playing together all day and even nursing from one another’s mom! This group of four wild ones are all so close to each other.

IAM is Unity’s baby (pictured right) he was born one month before Helix, Omega’s baby and they have played like this ever since. Just like their moms, they both are physically identical, but very different in personality. Helix is much like Omega and loves to greet and meet new people. IAM is also social, but is a bit more grounded in his energy system. It is truly magical to share space with these four. They have a chemistry that is tangible. This ‘Soul Family’ herd of four is featured in an upcoming photo book on Mustangs called ‘Wild Heart’. 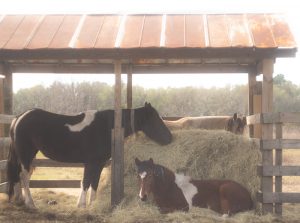 < — Two of this painted trio of wild beauties are some of our newest additions.

Do you see Magic back there behind the hay? Well, she is one of our Ambassador Mustangs and she is much of why we created this Mustang Sanctuary! After we adopted Magic back in 2012, I began following her wild family that still lived in her homeland of the South Steens of Oregon. I was able to determine through the wild horse photographers that this black and white pinto Mustang was Magic’s FULL biological sister! She was named ‘Gabriela’ by the photographer and through their lens, I watched her grow up in the wild. She had multiple foals before being rounded up just last year. I was sad to see that she was one of the ones that was gathered, but excited to be able to adopt her and bring her home to her sister, Magic!

Gabriela was in foal (of course!) and her little bay pinto filly is the one sleeping in the hay, Magic’s niece! Learn more about this Mustang Family on their special page. 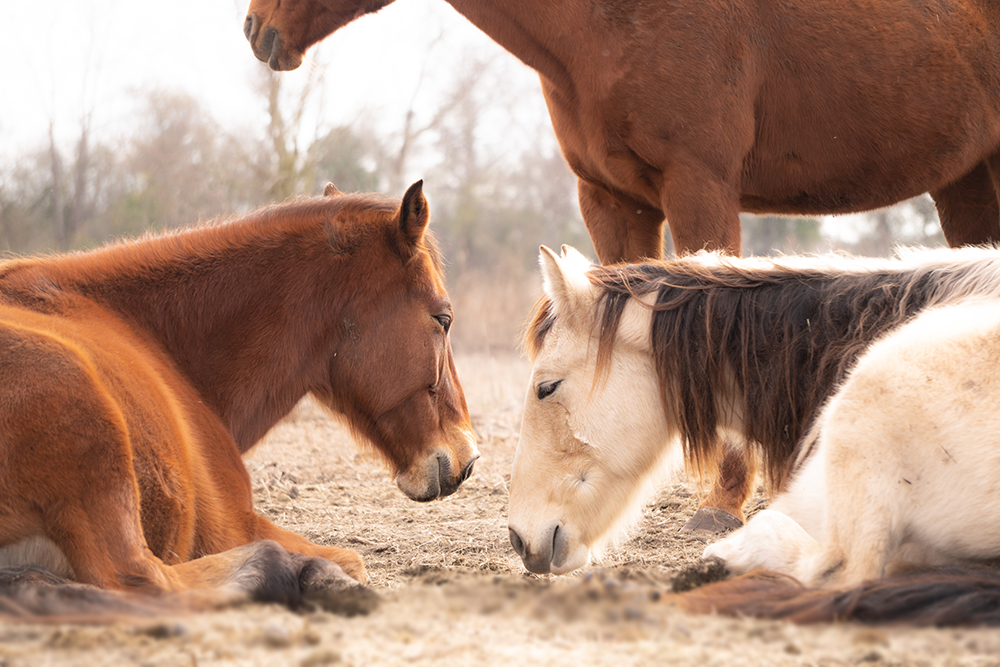 These two sleeping beauties (above) are Silver (left) and Brave (right) They were gathered from different herds in Nevada, but they have become good friends.

Silver is one of our original five ambassador Mustangs and I have a very close personal bond with him. He is from Silver King, Nevada.

We adopted Brave (top right) in 2013 when we spotted him at a BLM adoption auction, his mother was in foal when rounded up from Nevada and he was born in a BLM holding facility. 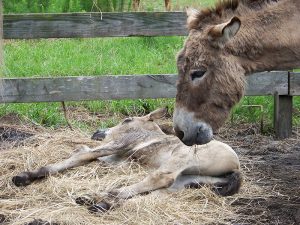 <– Amigo is our one and only BLM burro. He was born in the wild of California and he loves loves loves a tail scratch. Here he is baby sitting little Helix only days after he was born.

There are many burros in the west, just like Mustangs. Sometimes they form their own herds and sometimes they mix together. Amigo is always so full of peace and serenity. He seems to calm the whole herd, just with his presence. He calms me too. I just adore his eyes. (below) 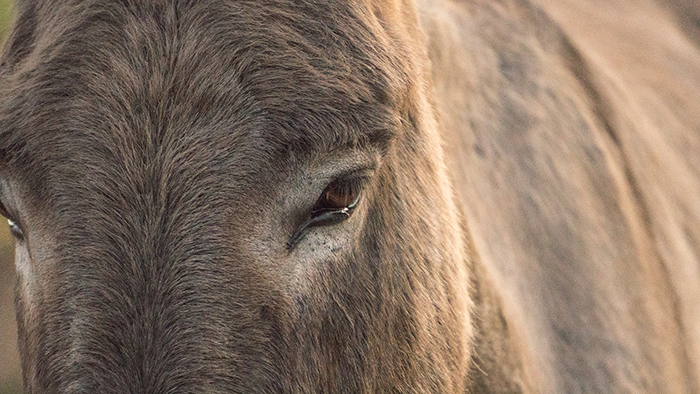 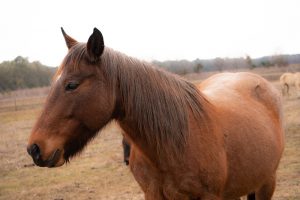 Lindsay’s Faith is a very special Mustang to us. She is not only one of our first five Ambassador Mustangs, but she is the very first Mustang we ever adopted! She even has a Breyer Model Horse created in her likeness. She is currently ‘retired’ from her riding career where she won National awards and she now enjoys just being a wild Mustang again. She is currently ‘re-wilding’ you might say … and she highly recommends this ‘re-wilding’ to you too! Pictured below she is getting a good back scratch from Mother Earth herself. 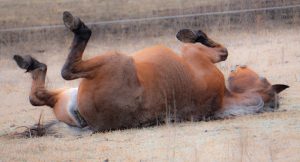 Mustang pony, Clarity, is pictured below taking a midday nap, along side Omega, one of the white ‘Soul Sister’ Mustangs. Clarity was rounded up in Nevada when she was one year old. From there she went to one of the biggest BLM holding facilities in the west and lived there for the next four years. She was put up for adoption, but was passed over time and again. Three times to be exact, which meant she  became a ‘Sale Authority’ Mustang. As adorable as this little 12 hand Mustang pony was, we found it hard to believe she could have been passed over so many times! Turns out, the 4th time was the charm for Clarity. We adopted her and brought her home. 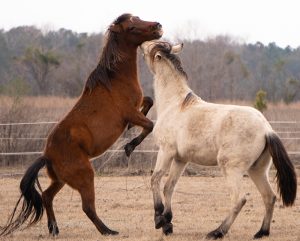 Clarity is about half the size of the grown Mustangs, but she has a strong presence and intelligence about her. To the right she is letting IAM know that she is done being pestered. IAM is still a baby Mustang and likes to play.

Clarity is a decendent of the ponies that mined for minerals in the Nevada mountains years ago when horses were the primary means of transportation and work! So Clarity has deep rooted genetic imprints of hardiness and smarts. What a job that would have been, those ponies literally lived in those dark caves their entire lives sometimes. We are certainly happy that is not Clarity’s reality and we are thinking she agrees. 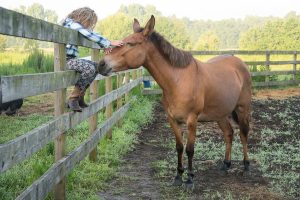 Do you notice something a little bit ‘different’ about this Mustang??? Yep! She has LONG EARS! She is not a BLM Burro like Amigo, but her dad was!

This is Violet and she is a Mustang MULE! This is not super common in the wild, but it DOES happen. Violet’s mom was a Mustang horse and her dad was a wild burro (donkey) Sweet Violet was adopted by a fellow Mustang advocate and now calling our Mustang Sanctuary home. She is pretty special and she knows it. If there was a picture of a ‘Social Butterfly’ it would be Violet’s face 🙂 Which is also about the SWEETEST face ever! Below is Violet getting a hug and loving it. 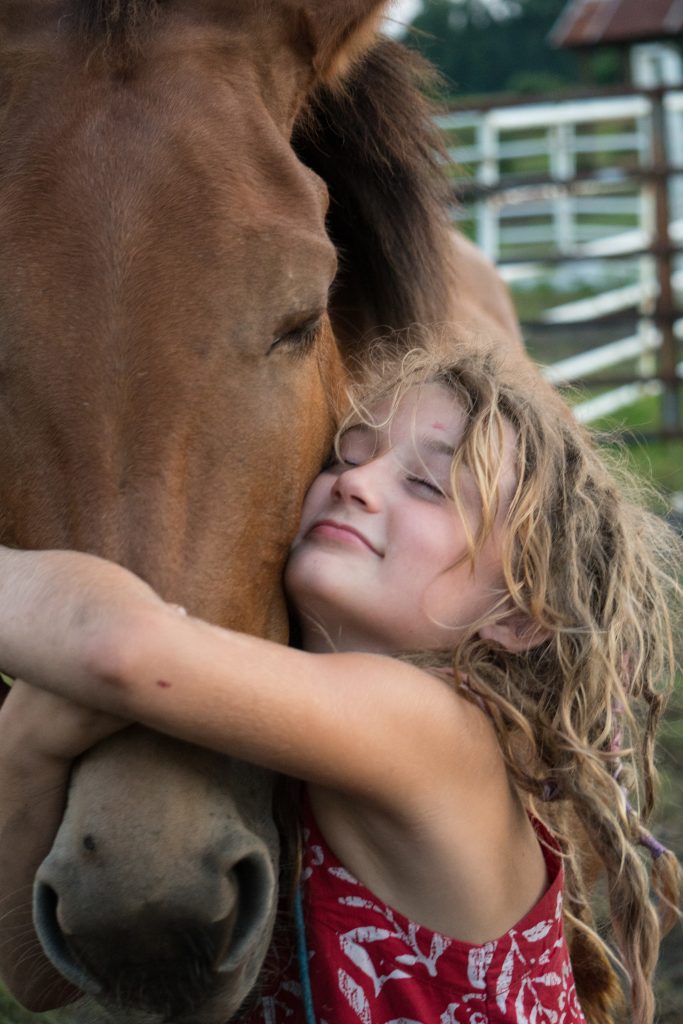 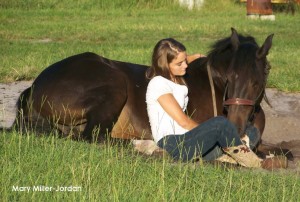 Sueno, pictured right, is one of our Ambassador Mustangs. She was the second Mustang we adopted and she is so deeply kind. She loves the Mustang Meditations and is very attune to the energetic presence of the herd and those that enter their space. 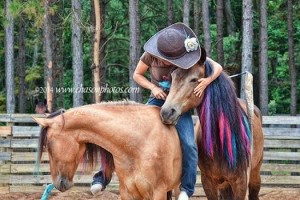 Dance, pictured left with Mary aboard, is our very first Rehabilitation Mustangs. He was originally gathered from Sulphur, Utah and adopted by a well-intention-ed family in NC. Once they got this new, and very WILD, Mustang home they found that it was harder to gentle him than expected and they tried to find a home for him. It is not easy to find someone to take in a wild horse and they ended up becoming desperate and giving him to a local cattle farmer. Once the cattle farmer turned him loose on his big pasture, he realized just how wild he was and he decided the only thing he could do was take him to auction. After 3 days of chasing him with their 4 wheeler, they finally managed to get him penned up in a holding corral. At that point the word had gotten back to me that this little wild one was in need of help. He was scheduled to go the the livestock auction on Monday and we picked him up on a Sunday! Whew! …

The gentling process with Dance proved to be very time consuming. He held so much fear of – everything. He is still deeply sensitive today, but has a strong bond with Mary. Some of our Mustangs are more ‘wild’ than others and Dance is one that likes playing wild horse. 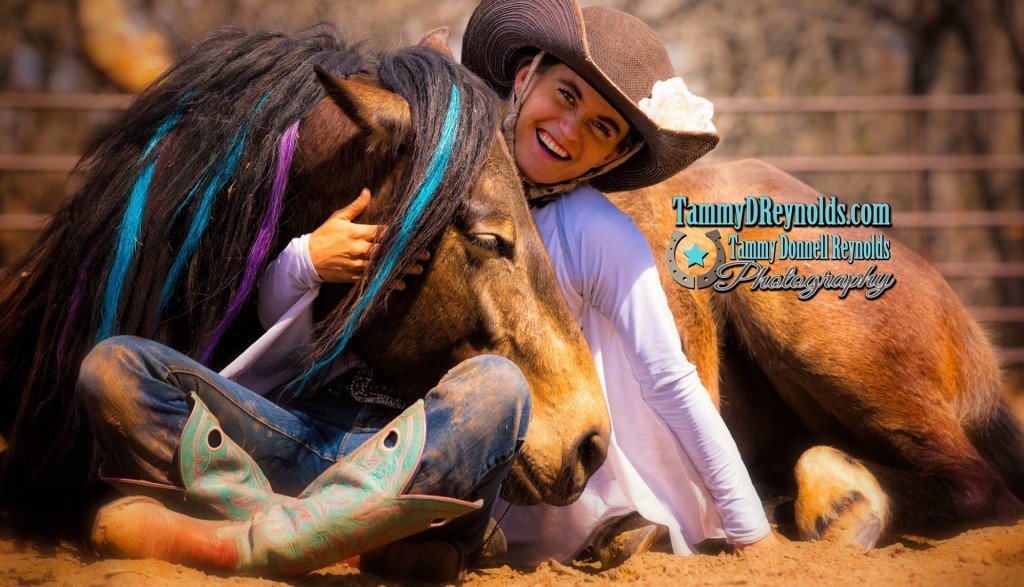 Colors, pictured above, is no longer in this glorious Horse suit. But she is such a HUGE part of the Heart Space here at the Sanctuary that I simply have to include her here as well. Colors is one of the original Ambassador Mustangs and the 5th wild horse Mary adopted. Mary & Colors were featured on National Geographic, demonstrating kind gentling techniques with a wild Mustang. 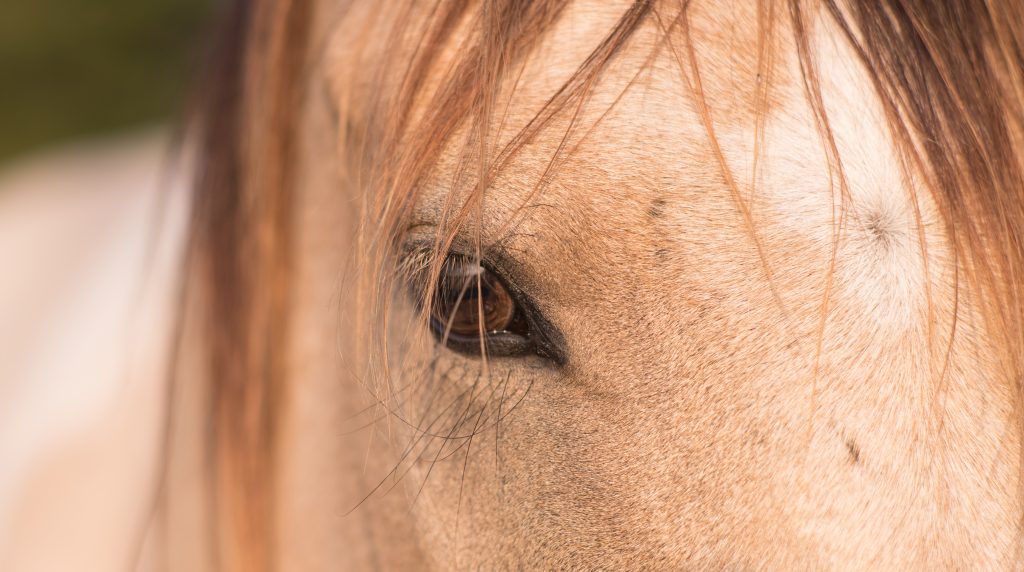 … and then there was Magic. Well actually, Magic came early on. She was the 3rd Mustang Mary adopted and is one of the Mustang Ambassadors as well … Magic is what started the fascination with the South Steens, Oregon Mustangs, which lead to 7 Mustangs that live on the Sanctuary, that are all part of Magic’s Family Herd

There is one more Mustang we must mention, though she is not yet here on the Mustang Sanctuary. She is a Rehabilitation Mustang as she has deep rooted emotional scars from previous homes. For right now, we are calling her ‘Rainbow, because we are certain that Colors guided us to her … or her to us. It will be a large expense to take on such a special needs case, but we are dedicated to this special girl. If you would like to learn more about Rainbow, visit her page –> HERE 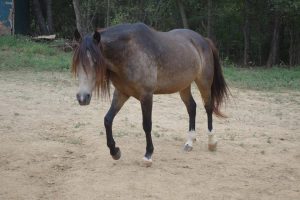