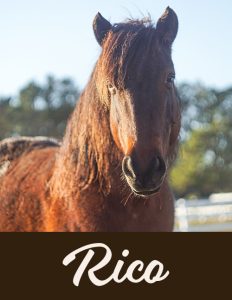 Rico is our newest addition to the I AM HERD Mustang Sanctuary. He is a Corolla Wild Horse, also known as a ‘Banker Pony’, he stands 12 hh. Born wild on the beaches of Corolla, located in the Outer Banks of NC. If I had to describe Rico in three words they would be sensitive, kind, and intelligent. We are enjoying getting to know him and enjoying observing him, as he gets to know us. He is the kind of Being that seems to really want to connect to his people in a deep, meaningful way. If he was a human, he would not engage in small talk, but rather hold space for the conversations that hold a deeper meaning. It truly feels like a profound honor to be his caretakers. He has such ancient wisdom of an elder moving through his beautiful mahogany bay body. At 12 years old, having been a wild stallion for the first half of his life and with all the ancestral knowledge that weaves through his DNA {these Corolla Wild Horses are descendants from horses that have lived on these beaches since the 1500s!} – Well, let’s just say, he has much to share, much to teach. What a blessing to have the opportunity to welcome him into the I AM HERD Mustang Sanctuary.

Rico has one sponsor on his team, Judy Hewett, and is looking for 6 more individuals to fulfill his full sponsorship team of 7. We are committed to offering Rico a forever home here at I AM HERD, but we cannot do it alone. I AM HERD is a non-profit and depends on public support to care for this herd. Sponsorships are $50/month and receive Gifts of Gratitude and updates from Rico throughout the year.

If you feel a connection to Rico, please consider becoming his Sponsor.

Read on for more of his story … Rico lived as a wild pony stallion on the outter banks beaches of Corolla for his first five years. The Corolla Wild Horse Fund (CWHF) is an amazing non-profit organization that manages the Corolla Wild Horses, monitoring their health and well-being. It was thanks to them that Rico was found in need of help when he was five years old. They brought him in and found that he had a fractured coffin bone (this is a bone in his foot) Thanks to Rico’s intelligence and gentle nature, they were able to put a cast on his foot, instead of putting him down as would typically be the case with such an injury. Rico healed 100% and became sound again! However, he could not be returned to the beach to live as a wild pony, due to the fact that he was now too habituated to humans and it would not be safe for him to live wild again. 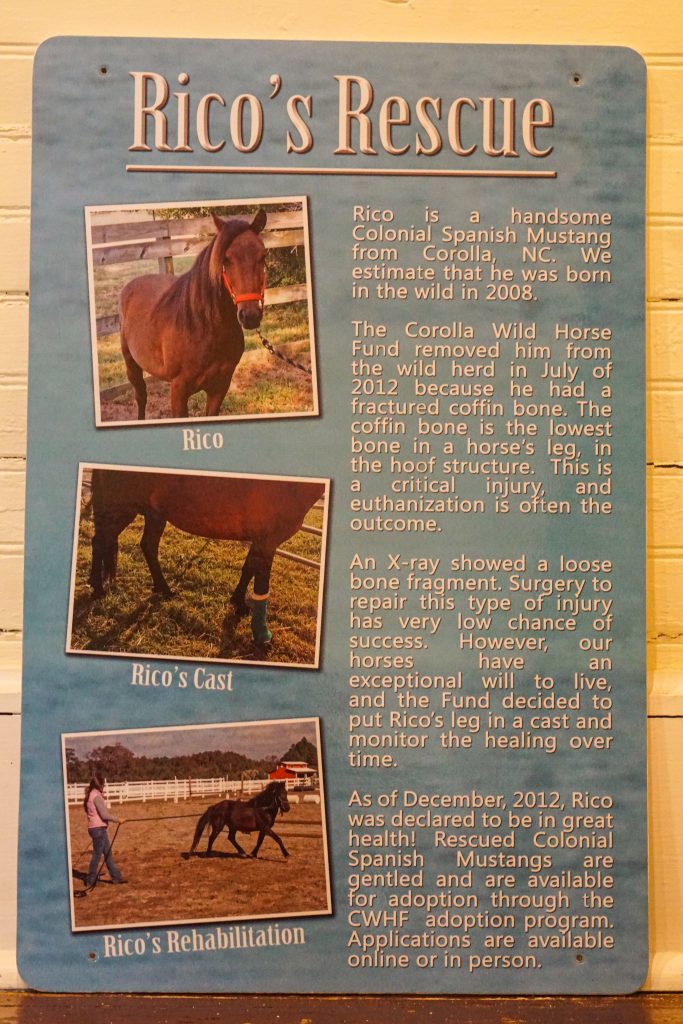 (above) This is a wall plaque that hangs in the Corolla Wild Horse Museum about Rico’s Rescue!

After he became sound, Rico was put up for adoption and went to a family who kept him for over 5 years. At some point during his time there he foundered and became lame again. He was returned to the CWHF and they willingly took him in to rehab him and see if he would be a fit for another adopter. The CWHF is very dedicated to the forever care of these wild ones!

It turns out, an I AM HERD volunteer knew Rico well. She had worked with him when he was first brought in from the wild and she loved him dearly. Knowing he was now in need of adoption, she reached out to I AM HERD to ask if we would be able to take him in. As fate would have it – at the very same time – We were feeling that Sahaja, our wild pony foal from the VA mountains, was in need of a mentor…. and more than the mentorship a human or even a goat could provide – Sahaja needed a Pony mentor… and a formerly Wild Pony Mentor sounded almost too good to be true. … So we contacted the CWHF to discuss the possibility of Rico coming to I AM HERD. We were overjoyed to hear that Rico was known to LOVE foals and treat them with gentle, but firm kindness. When we drove up to meet him, we knew he had to come home with us! 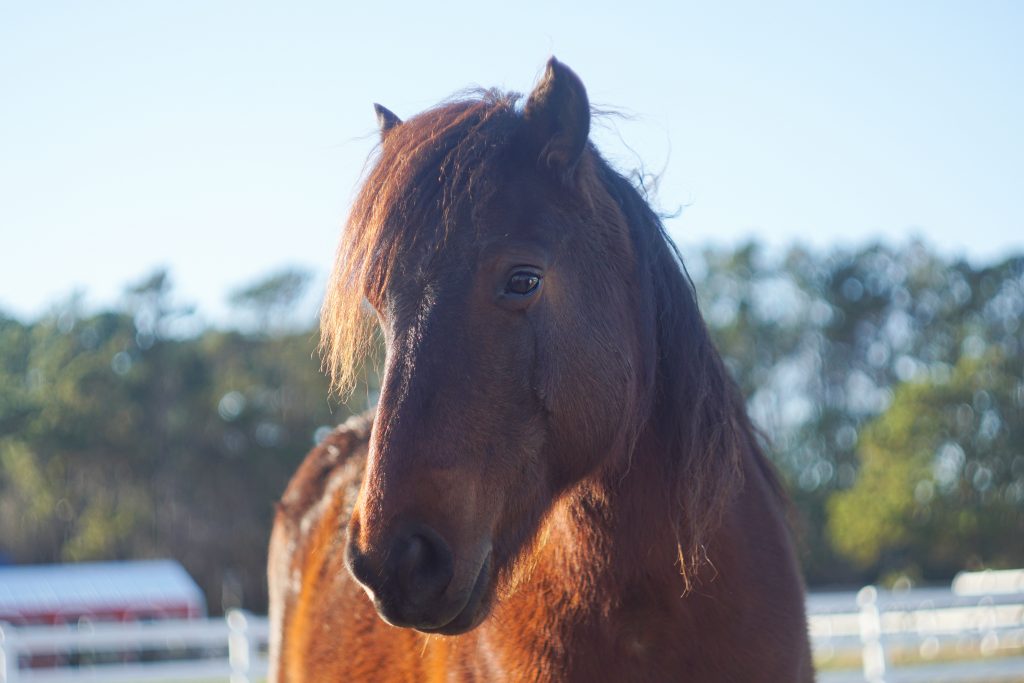 (above) This photo is from the day we met Rico at the CWHF.

An extra bonus was we were able to meet the infamous Ramond the Mule (below) that lived on the Corolla Beaches for many years before the CWHF needed to rescue him when he became lame after hurricane Dorian. It was wonderful to see him happily eating his hay at the rescue farm. Raymond the mule is not a fit for adoption, so he will live out his days under the kind care of the staff and volunteers at the CWHF. You can learn more of his story and even sponsor Raymond’s care by visiting the Corolla Wild Horse Fund website. You will be supporting a very worthy cause! 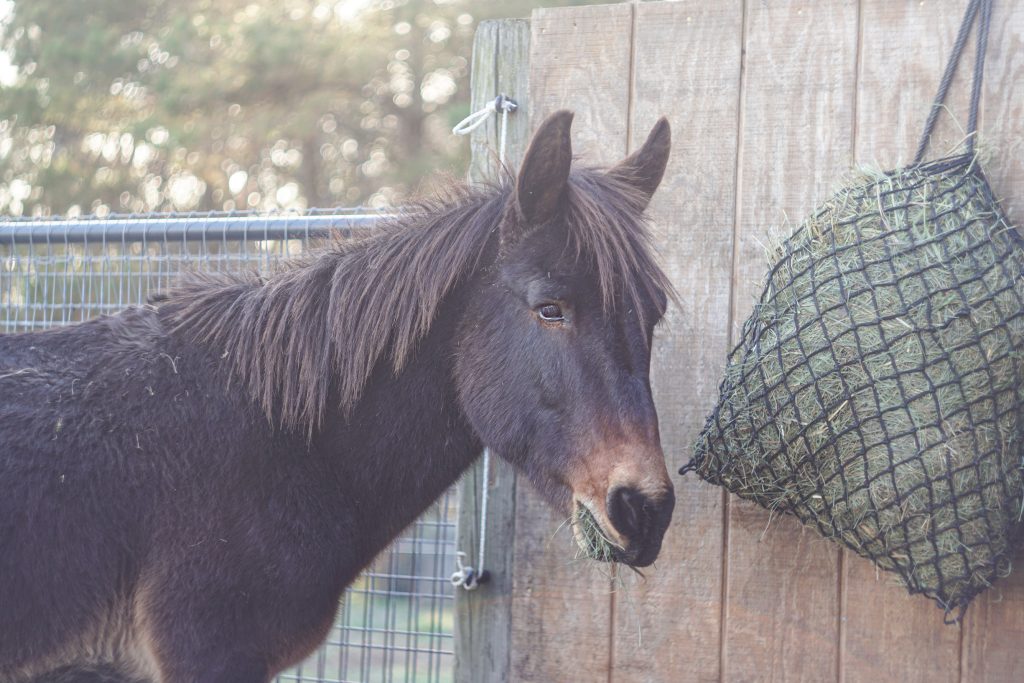 We also took a tour of the Corolla Wild Horses that live on the beaches. It was quite amazing to see them in person and we were so impressed by the dedication of the staff and volunteers of the Corolla Wild Horse Fund. They drive the beaches every single day to monitor the wild herds. There are so many houses and people in these same spaces, that it is a true challenge to keep this wild ones safe. The CWHF does an amazing job and we will surely be back to visit again! To think Rico grew up right here – just WOW!

These wild ones are not BLM Mustangs and not managed or protected by the government as the BLM Mustangs out west are. There is an influx of homes being built on the beaches where these ponies live and a true need for awareness around the well-being of this wild herd’s survival in years to come. We hope that by having Rico join I AM HERD, that we can help raise awareness for the Corolla Wild Horses as well. 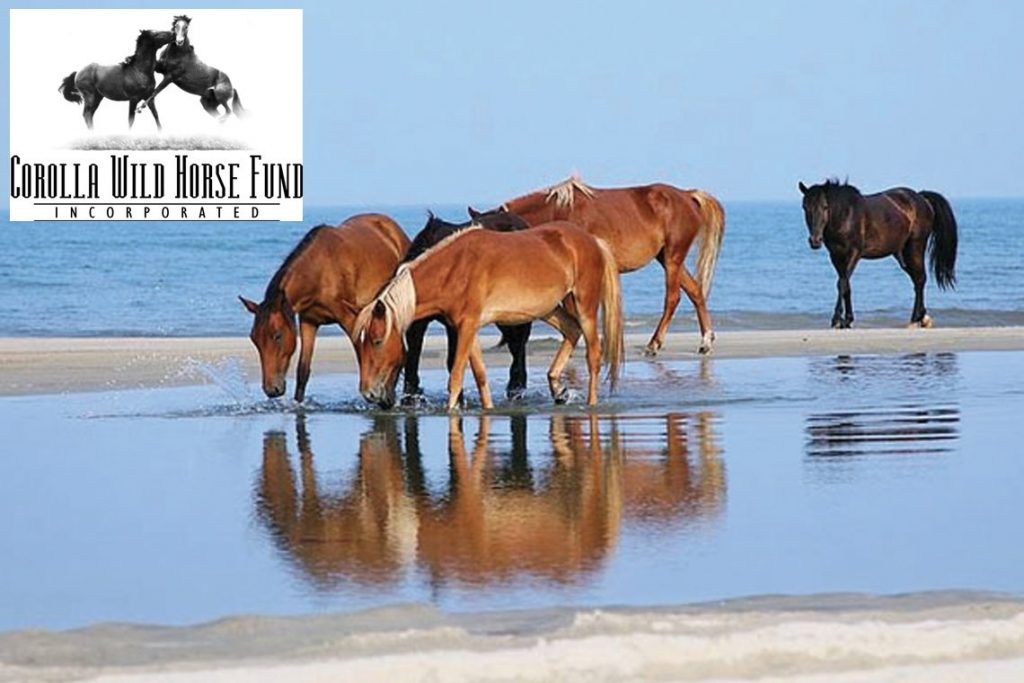 AND .. did you know this ??? The Corolla Wild Horse is the North Carolina State Horse! How cool is that? We are so honored to have the NC State Horse as part of our special herd here at I AM HERD. … We are located in NC 😉 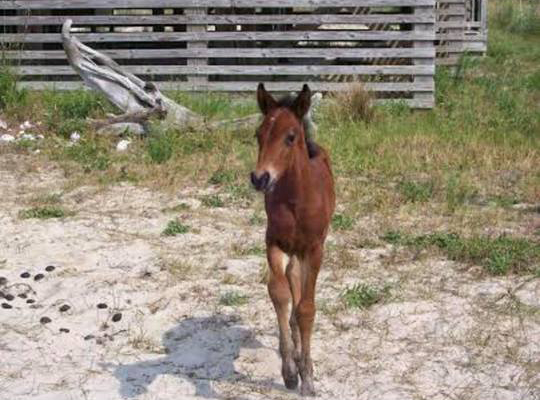 (above) Rico as a baby on the beach! .. See the house behind him? Houses are all over the beaches there.

We are so very grateful to share that Rico has fully integrated into the herd with both Sahaja and our family pony Squirt! This little herd of three are becoming three peas in a pod and Sahaja is feeling so held by Rico’s steadfast guidance and love and Squirt is playing much more gently with Sahaja, now that Rico is part of their herd. You can read Sahaja’s story to learn more, but we were having to only let Sahaja and Squirt together for ‘supervised’ visits because Squirt could get too rough with how he played with Sahaja. This dynamic is different with Rico as part of the herd 🙂 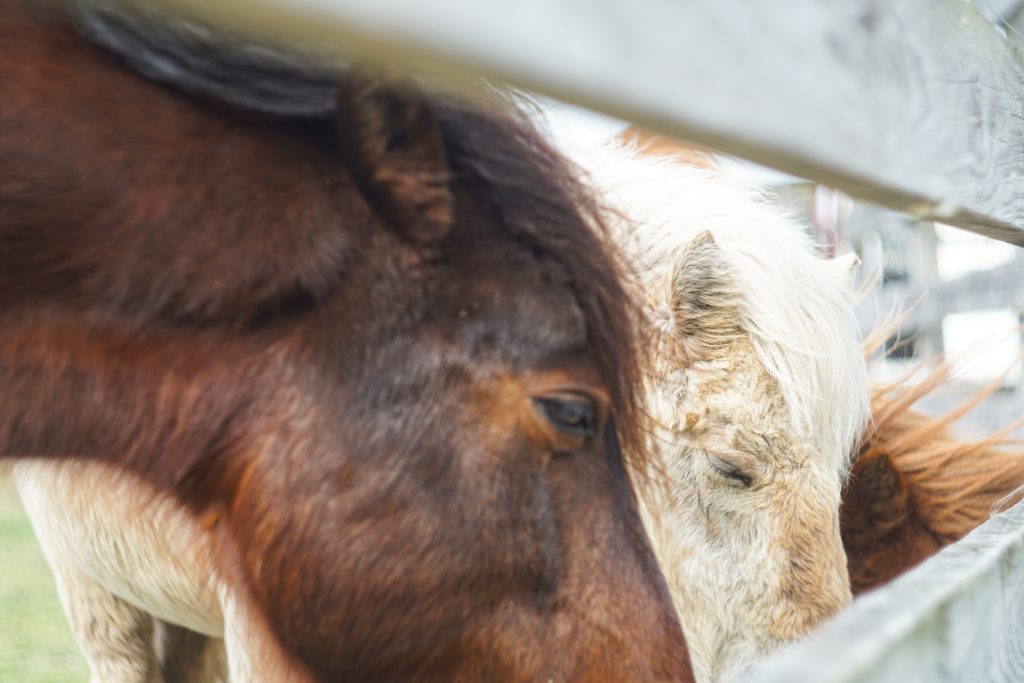 We are currently working with Rico and getting to know him even better. He is doing so well, that we think he may be able to be a part of our Mustang Mentorship & Meditation programs at schools in the future and might even be able to go in Nursing Homes with us to greet residents bedside, like we do now with Mustang Sueño! Time will tell and there is no pressure. Rico is more than enough, just being here, just Being Rico.

The presence of his essence here in this herd is such a treasure and we are grateful for the opportunity to offer him a true forever home at I AM HERD – but we do need your help! I AM HERD is a non-profit and depends on public donations to do the work that we do. Sponsoring a Horse or Pony that you feel a connection to is one of the most supportive ways you can help this mission. The most amazing part is the way it truly connects the Caregiver TO the horse or pony they are Sponsoring! These wild ones just know and they are so grateful for Your help!

Would you help Rico by becoming his Sponsor?

As your first Gift of Gratitude for your Sponsorship, we will mail professional print on archival paper of your sponsored horse! We send out additional Gifts of Gratitude throughout the year, and send you personal updates from Rico!

Above all, you will know that your donation ensures that we can provide the best of care to Rico. Sponsorships are a monthly donation of $50, the cost of a bale of hay, and are a one year commitment. You may opt to have your monthly donation withdrawn automatically or you may pay in full for the year either via check or online credit card. The annual commitment begins the month you begin your Sponsorship (so a Sponsorship initiated in Feb 2020 will run through Feb 2021)

Rico needs 6 more Sponsors, at $50 each, to complete his Sponsor Team! Will you be a sponsor?

Blessings from this herd to your heart, there is truly a wild horse in all hearts that are drawn to them ~